Period Stitches (#3 in a series)
One of the most frequently asked questions in the Guild is, “What stitches are period?” This article, the third in a series of six, looks at the third category of the Apprenticeship Program, Whitework.
This article first appeared in the Guild newsletter, the Filum Aureum, Summer 2000.

Whitework is a general term for embroidery worked on white linen fabric with a white (usually linen) thread. There are many forms and styles of Whitework. Some forms use texture for effect, such as counted brick stitch or satin stitch work, and can be strictly classified as embroidery. Other forms rely on open spaces made in the fabric for their effect, such as pulled-thread and especially drawn-thread work. These forms of whitework lead to the needle laces of the 16th century. Whitework can also include outlines and details worked with a black, brown or dark blue thread of wool or silk.

Whitework was most typically worked on altar and table linens from about the 12th century. The earliest and most numerous examples that have come down to us are from Germany, where it was used for altar coverings, particularly for use during Lent. It is for this reason that whitework was frequently referred to in church records as Opus Teutonicum (“German Work”). However, there is a 12th century whitework altar cloth from North Italy (Lombardy) that is worked in stem and broad chain stitches, so whitework shouldn’t be thought of as exclusively German. 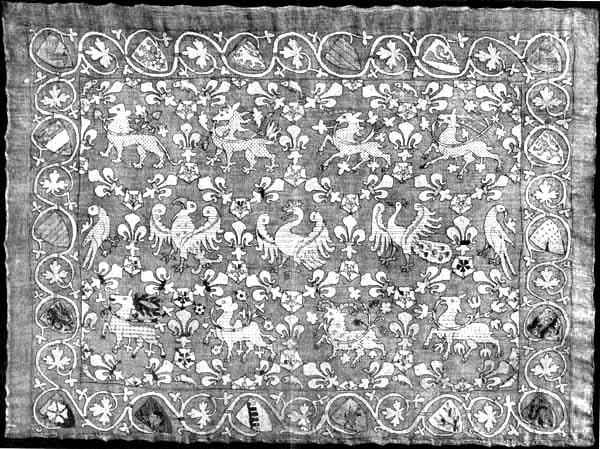 By the 14th century, whitework becomes more common in North Italian and Scandanavian altar linens, probably as a consequence of these countries’ proximity to Germany. However, it is surprising that there seem to be far fewer, if any, examples of English, Flemish or Spanish whitework until the 16th century.

It’s been suggested by more than one writer that the reason that so much whitework is concentrated in German convents is that these convents were so poor that they couldn’t afford silk and gold threads for their embroideries, so the nuns used the ravellings of linen cloth for embroidery thread. I think that while this may have been true in the beginning, a taste for the austere beauty of white-on-white, especially on a semitransparent ground, developed very quickly, with the result that whitework became a sought-after style in much the same way as Opus Anglicanum. Certainly, whitework is just as challenging to stitch as silk or metal thread work.

By the 14th century, suspici-ous-ly secular designs began to appear in South German and Swiss whitework, which may be an indication that these pieces were worked by domestic, or even professional, embroiderers. Some are likely to been used for secular purposes before being donated to the church. During the 15th and 16th centuries, such secular work becomes commonplace, and is used not only for table linens, towels and curtains, but also on some items of clothing. 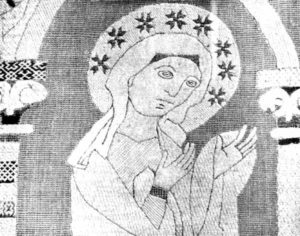 Regrettably, I haven’t found any solid evidence so far for whitework being used on secular clothing until the third quarter of the 15th century, when examples of white-work on the increasingly visible edges of shirts and chemises begin to appear in Germany, Italy and Spain. During the first half of the 16th century, the major forms of whitework (drawn-thread, pulled thread, insertion stitches, counted stitches such as satin and brick stitches) were all used to decorate personal linens more and more frequently, and this leads directly to the development of needle laces.

The techniques used in whitework vary from piece to piece. Those listed below are merely the most common.

Figures are drawn on the ground fabric, and are filled with tiny allover geometric patterns in counted satin stitch or brick stitch. The variety of patterns is astonishing. ( In Swiss Linen Embroidery, the figures may be outlined with a black, dark blue or brown wool or silk thread in stem or split stitch, or couching.) The ground fabric may be semi-transparent, very similar to handkerchief linen. The thread counts vary considerably – some of this work is on a very fine scale. I estimate them at about 30 – 60 threads per inch. (1)

In pulled-thread work,warp and weft threads are distorted to form the pattern – pulled sideways, bound into groups, etc., but not removed from the cloth. Pulled-thread work is sometimes used as a background in both whitework and polychrome embroidery. One simple technique is to simply make an overcast stitch after every 4th thread. Work vertically (warp), then horizontally (weft). The pattern that emerges is a regular grid of open squares. Pulled-thread edge treatments on chemises become popular in the 16th century: one version resembles hemstitching (a drawn-thread technique). (2)

In drawn-thread work, warp and weft threads are carefully counted, and certain threads are removed – pulled out of the ground fabric. The remaining threads are then worked in a variety of stitches. Drawn-thread used as a background (every 4th warp and weft thread withdrawn, then overcast stitch worked over the remaining threads) may be further embellished with darned-net (lacis) stitches. Drawn-thread borders become very popular in the mid-16th century, both on personal linens and on table linens. (3)

Counted satin is especially popular in Italy, but is also common in Germany in the 16th century. It is most frequently worked in geometric patterns, and may or may not be combined with drawn thread and cutwork techniques. Patterns are found in several pattern-books from the period. (4) 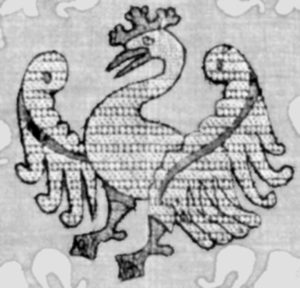 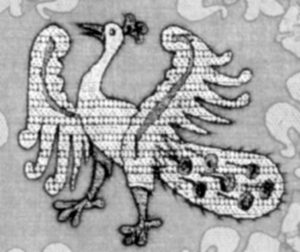 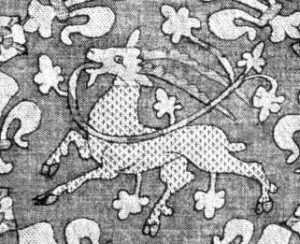 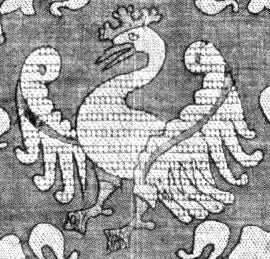 Dress-weight linens (light and medium weight), or semi-transparent handkerchief linen
I don’t recommend using “evenweave” linens that are purpose-made for needlework. Dress-weight & handkerchief linens closely resemble the fabrics used in period. However, if these linens aren’t readily available, tabby-weave cottons will work just as well. Cotton batiste is an excellent substitute for handkerchief linen, and is especially suitable for chemises and partlets.

A Pictorial History of Embroidery by Marie Scheutte and Sigrid Müller-Christensen. Frederick A. Praeger, 1963. (Try inter-library loan if your local library doesn’t have it.