For over 250 years scholars have studied, debated, photographed, classified, conceptualized, and theorized over the Bayeux Tapestry and its historical significance. It stands at the crossroads of three great civilizations: Viking, Anglo-Saxon and Norman. However, few have written about the embroidery through the eyes of an embroiderer. So we owe a debt of gratitude to researchers like Dr. Gale Owen- Crocker, Jan Messent, David Wilson and the group who presented papers at the Cerisy Colloquium in Bayeux, France in 1999. I’ll summarize some of their new insights here. 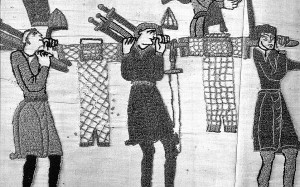 The tapestry (really an embroidery, since it’s stitched and not woven) was created between 1066 and 1077, commissioned by Duke William’s half-brother Bishop Odo, and destined for Bayeux Cathedral’s consecration in July, 1077.

English embroiderers were already producing work to high standards at this period: William the Conqueror’s chronicler and chaplain William of Poitiers wrote about the rich goldwork by English hands that adorned the state robes and “made all that France and Normandy had beheld of the same seem mean by comparison.”

Although some believe Canterbury was the headquarters for the design and development of the Bayeux Tapestry, Jan Messent proposes that this honor may belong to the City of Winchester. Winchester was the English capital, royal residence and location of the royal mint in the 10th and 11th centuries. It was also a great center of art production, well stocked with spinners, weavers and dyers. Messent suggests the tapestry was worked at Winchester’s Nunnaminster, a well-known nunnery that occupied a large plot inside the walled city, with the Norman-named Abbess Beatrice the organizer and collaborator with Bishop Odo on the project.

The foundation for the needlework is a fine bleached tabby-weave linen measuring about 230 feet long and 18 to 20 inches wide. Gale Owen-Crocker notes the Tapestry demonstrates the high quality of linen weaving in the late Anglo Saxon period.

The linen background is left fairly bare, not covered with needlework. To the naked eye, the seams in the Tapestry are almost invisible, definitely a salute to the seamstresses. Bedát & Girault-Kurtzeman attribute this to a three-step process: overcast stitching of the upper edge, overcasting of the panel sides, and then the joining, done in a “fine, regular whipping stitch with 2-ply yarn.” Messent notes that except for the first two panels, the others were attached to each other before the design was embroidered over the join.

Maylis Baylé suggests the tapestry was created during a time when many image sources came together: illuminated manuscripts, carved ivory panels, carved gravestones, and architectural carvings, all of which have been suggested as design sources in the past.

The laidwork technique now known as “Bayeux laid-work” figures prominently in the Bayeux Tapestry. But one can also find split and chain stitches, especially in lines and lettering. Stem and outline stitches are also present, mostly used for outlining. These two stitches are very similar in appearance, usage and technique, but stem stitch is done with the thread held below, and the outline stitch with thread held above the needle. They produce slightly different effects because one works with the twist, and the other against the twist of the embroidery thread.

Restorers Girault-Kurtzeman and Bedát inspected the back side of the Tapestry for their Cerisy paper, and showed that shapes in the Tapestry were outlined in a contrasting color before they were filled in. Some areas, in fact, were only outlined, especially faces and hands. Stem or outline stitch is also worked in closely packed rows as filling for acanthus leaves, hair, animal tails and bird wings, as in the scene where Harold is being crowned.

For the Bayeux laidwork, long, closely worked parallel threads are laid across on top of the fabric. A second layer of threads is laid at right angles, evenly spaced across the first layer, and couched down using a stab stitch. Generally the added threads are the same color as the base threads, but in the scene where Harold is crowned, Bishop Odo’s cloak is laid with a different color for a patterned effect. The same applies to the bricks in the tower in the same scene.

Good photos show how the stitch direction changes within motifs. Clothing is often worked with a vertical first layer and horizontal stitches in the second layer. There may be a change in direction at the shoulder or elbow, or it may continue in the same direction over the whole figure.

Threads change direction to mimic the wind’s billowing effect on ships’ sails and to mark the separation of animal legs from bodies. To handle long thin shapes such as trees and legs, laidwork can be done in adjoining “blocks” of long stitches, with an extra second-layer thread hiding the joins where one block meets another.

Researchers who have had a chance to look at the back side of the tapestry note, surprisingly, that not much fading has occurred over the ages. Girault-Kurtzeman and Bedát report in their Cerisy paper that the terracotta reds were produced from madder, the beige and yellow from weld, the three shades of blue from indigotin, and the three shades of green from weld plus indigotin. Indigotin is the dye chemical in woad, a common European dye plant.

When you think about the size of this project and the number of embroiderers, overall the color scheme works. In spite of some unnatural combinations — dark blue horses, or a horse with three different colored legs, the colors meld into a cohesive whole. As for which colors were selected for which shapes, Messent suggests that a limited color palette, overlapping figures, cooperation with one’s fellow embroiderers, and some established guidelines probably determined the overall color scheme.

In further papers from the Cerisy symposium, Baylé notes that the Tapestry’s color scheme “has no real exact equivalent in Norman illumination” before the end of the 11th century, but that the colors used do correspond to those found in Anglo-Saxon manuscripts. In particular, outlines in contrasting color to the filling of shapes can be seen in the Anglo-Saxon illuminated manuscript called the Hexeteuch.

Gale Owen-Crocker points out that colors in adjoining areas of the Tapestry are contrasted to distinguish, for instance, the inside of sleeves from the outside, or a horse’s legs from its body. One of the best scenes for use of contrasting colors that designate inner and outer legs of the horses overlapping is the panel where William’s ships sail to England.

She also notes that many colors used in early manuscripts of the Anglo-Saxons were more decorative than realistic. She suggests the depiction of clothing may also be unrealistic, noting that for instance it is unlikely that the warriors would have been wearing full-bodied chain mail on their legs, especially if riding a horse.

Parallels have also been found to the Tapestry’s use of framework and stylized creatures as a border. The late 9th to early 10th c. Llangors fragment, a recent discovery, displays stylized birds within a framework of geometrically drawn vines.

Finally, why has the Bayeux Tapestry been called a “tapestry”? Nicole de Reyniès suggests a partial answer. In the 19th century, the word “tapestry” was used “to spare the work of any association with the degrading image of embroidery, which by the eighteenth century had been reduced to simple decoration for clothing.” Calling this hanging a “tapestry” became a tribute to its quality and value as a work of art.

Bayeux Tapestry: Embroidering the Facts of History. Presses Universitaires de Caen, 2004. Proceedings of the Cerisy Colloquium (1999). Essays cited in this volume include:
• The Bayeux Tapestry and Decoration in North Western Europe, by Maylis Baylé.
• The Technical Study of the Bayeux Tapestry. Isabelle Bedát and Beátrice Girault-Kurtzeman.