Canvaswork in Elizabethan England was more than simply using Tent stitch to create an overall design, though that was certainly used. In particular, many of the surviving Elizabethan and Jacobean sweet bags were worked on fine linen canvas in a variety of stitches, some counted and others surface, all used together on the same piece.

I have been working on a reproduction of a sweet bag done in the manner of an Elizabethan one, and have illustrated this brief article with those photographs. 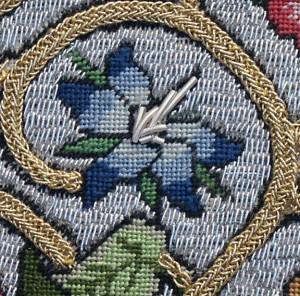 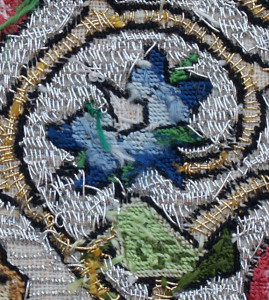 My first photo has zoomed in on the borage in the center to show a typical array of historical stitches. The flower petals and leaf are done in Tent stitch using a flat silk thread (Soie Platte) for maximum sheen, and in imitation of the materials used then. The coiling gold stems are done in Plaited Braid stitch using a passing thread of Benton & Johnson imitation gold. The center of the borage is done in classic goldwork style, using genuine silver smooth purl.

I started working the background after looking at modern sources for how the stitch should be made. The diagram in red is of the modern method for creating the stitch. It is worked in rows, and there is more thread on the back than on the front. This may be fine for silk, but for silver, it means less of the precious metal is on display. And as you see when you compare the pictures of front and back, with the modern method there are in essence two layers of metal thread with the linen canvas between them. The resulting piece of embroidery is fairly stiff and resists folding (such as when a sweet bag is pulled closed).

So I went back to the original photographs, both on-line and ones I had taken when I visited some of the bags in person. I also have a few photos taken of the inside of some bags (at bad angles, and not perfectly focused, alas). The insides of the bags show very little silver thread on the back, just little dots. It soon became clear that the Encroaching Gobelin stitches on these bags were done in columns, as in the diagram in green. Very little of the precious metal is hidden. This method also has the advantage of providing a more flexible fabric that does not resist being drawn together as a drawstring bag often is.

The front and back details below of the background near the borage flower show the stitch done the modern way for most of the background. But in the lower right corner, I switched to the Elizabethan way. As you can in the second detail, they look quite different on the back. But can you tell the difference on the front? I can’t — unless I’m holding the canvas up to the light. 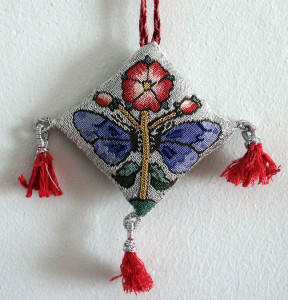 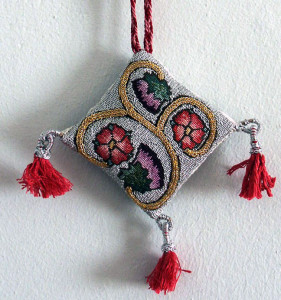 The next two photos are the front and back of the pin pillow I worked to match the sweet bag. As you can see if you look at any needlework book that shows sweet bags, a number have a matching pincushion attached. My pincushion uses Tent stitch, done in a twisted silk thread (Pearsall’s silk), Plaited Braid on one side and Ceylon Stitch on the other in Benton & Johnson gold thread, and Encroaching Gobelin backgrounds in B&J silver thread.

This was an early experiment, so I worked the Encroaching Gobelin background entirely in the modern method. I’m pleased with the way it came out, but I entered it into a modern embroidery show, and got the very sensible comment that the technique was not particularly well suited for the stated purpose. I couldn’t argue!

Sweetbags used other stitches as well, with a particularly rich variation on the background (silver) stitches. Plaited Gobelin was another fairly commonly used background stitch, as well as several other counted stitches that have not been given names in modern texts.

Resources
This is by no means a complete list, but these books have some particularly good images.

On the Internet, I suggest you browse the collections of Boston Museum of Fine Arts, Cleveland Museum of Art, Victoria and Albert, and the Tassenmuseum Hendrikje. There are more, but these are the richest sources.

As Melinda Sherbring, I am the author of the someday-to-be-published book Sweet Bags Richly Embroidered: Design and Construction of Elizabethan and Jacobean Drawstring Bags.

Why are sweet bags called sweet? I have a page in my forthcoming book on that topic. Here are some excerpts.

In an accounting of a visit by Queen Elizabeth to Canterbury in 1573, the list of expenses included wages of 2£ to the Heralds, 1£ to the Sergeant at Arms, 6s 8d to the musicians, 3s 4d to Walter the Jester, and “For a purse to put the money in, 16s, For the sweetning thereof, 2s.” (From John Nichols, The Progresses and Public Processions of Queen Elizabeth, New York, Burt Franklin, 1964. Vol I, p. 548, footnote 1.) It is clear from this that a sweet bag could indeed be a sweetscented purse.

Modern sources also refer to sweets being put inside. Use of the sweet bag as a gift in its own right can be found in the lists of New Year’s gifts given to Queen Elizabeth. These can be found in the Nichols book mentioned, and some of the lists are online at: http://www.larsdatter.com/gifts

An example is: “One large swete bagge of ashe-color satten, embrothered all over very faire with a branch of eglentyne tree” (from the gift list for 1599).