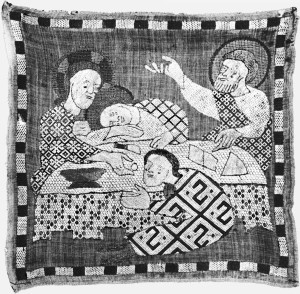 Whitework is a modern term for most embroidery on white linen (or cotton) worked with a white thread (linen, cotton, silk). There are many forms of whitework, but the form we are concentrating on in this survey is pulled work.

Pulled work is the distortion of the warp and weft threads to form patterns. The threads are literally pulled out of alignment and bound into groups to create patterns. Pulled work is also used to create a background for other embroidery.

Other types of whitework include drawn work and cutwork. In drawn work, a thread is withdrawn (hence the name) and the remaining threads are bound. The opening may then be filled with elaborate filling stitches. In cutwork, the threads are cut out in a design and the edges are then bound. 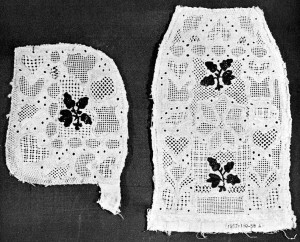 Santina Levey in Lace: A History points out an early example of pulled-work eyelets at the neckline of the Crivelli figure of St Catherine from the Demidofff altar piece of 1475. However, most of the surviving examples from the 13th and 14th centuries are church linens. 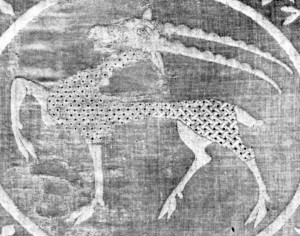 One prominent whitework style that uses eyelets is “Opus Teutonicum,” found in Lower Saxony from the 13th century. It uses primarily counted-thread satin stitches, but there are significant examples of the use of eyelets. One such piece identified by Schuette is a 14th century tablecloth from Switzerland, embroidered with grotesques and mythical beasts (Schuette plates 151-153). It is worked in white linen thread and some colored silk on a very fine and loosely woven linen. The stitches used are satin, brick, eyelet and plait stitches.

As shown in the “goat” from this tablecloth (left), the body area is filled with eyelet stitch. The eyelets are done on the diagonal and used to fill other figures on the tablecloth.

There is also an example of solidly worked eyelet stitch (right) in the Uppsala Cathedral Museum, done in colored silks with a pattern very reminiscent of the 13th and 14th century Westphalian embroidery that we are used to seeing in brick stitch. In the Uppsala example, it is debatable whether the stitches are truly pulled or merely open due the tight stitching of the eyelets, but in other similar examples the pull is evident.

Whitework comes into more widespread use for personal linens such as shirts and chemises in the 16th century. A number of European portraits have bits of whitework showing around the edges of necklines and cuffs. While most of what was done is either drawn work or cutwork, there are a few examples of pulled work. One beautiful example is shown on the partlet of Bronzino’s Portrait of a Young Woman c. 1550-55. While there is quite a bit of satin stitch shown, there are also rows of eyelets that are worked square to the fabric (versus the diagonal as shown in the Uppsala example).

Four-sided stitch is one of the most common pulled thread stitches, perhaps because it can be used like hemstitch to finish edges as it binds the threads. The Nebabri sampler from the Museum of London is primarily drawn work, cutwork, and lace in metal thread. However, between the sections of lace are sections of plain linen edged with two rows of pulled 4-sided stitch. Santina Levey shows other examples from the Victoria and Albert Museum where two lines of 4-sided stitch are used near the edge of the fabric and then a needle lace edging is added. There are rows of 4-sided stitch on the Bronzino partlet as well, where the neckline meets the collar. 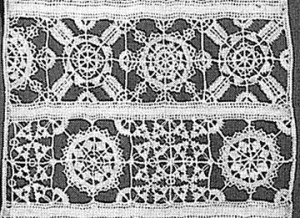 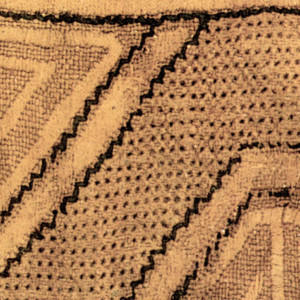 Faggoting means “to bundle” and originally referred to bundles of sticks. As a stitch, it is a pattern of wrapping threads, usually 2 or 4 at a time, in a hard-pull diagonal pattern. Double faggoting wraps each step (up or over) two times around. In the Islamic embroideries, a common variation on the faggoting stitch is wrapping 2 times on the horizontal and only once on the up (or down) leg.

One of the examples in Levey (Plate 6B: V&A 22-1887) shows a fabric edge with a pattern done similar to the earlier church linens from Switzerland, with the pattern filling done in double pulled backstitch. Plate 7 in Levey shows Bronzino’s Portrait of Isabell de’Medici from the mid-16th century. The edge of her chemise has a band with the fairly distinctive holes made by faggoting.
closeup of Islamic embroidery: faggoting stitch and pulled backstitch 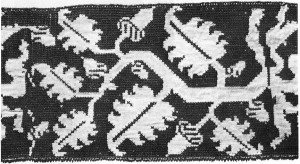 Italian 2-sided Cross Stitch, pulled tightly, has a limited use as a late 16th and early 17th century pulled-work stitch. It is used in voided work as the ground stitch done in a colored silk. There are two examples in the V&A textile shelves: one in red (V&A 502-1877) with double running as the outline, and one in green (V&A 502-1877), with double running as the outline stitch. Faggoting is also used in the same manner, as a background filling stitch with colored silks.

While the use of pulled-work stitches is limited during the time before the 17th century, it provides us with one more stitch and tool to use for decoration. The key to using the pulled stitches effectively for the earlier historic needlework is context.

When doing pulled work you need to remain conscious of 3 main things:

(1) Tension is the key to making the embroidery look right. The amount of tension or pull you apply will affect the overall look of the area being worked. The tighter the tension/harder the pull, the more lacy the piece will look. Above all keep your tension even.

The starting end of your thread must be securely fastened. Thus, begin your thread by fastening it in the outline whenever possible, and end your thread by running it under the outline. If you need to start within a pattern, be sure to run your thread under in the OPPOSITE direction to the one you are traveling.

Since the objective is to pull evenly and firmly to produce neat holes, the direction of the pull needs to be considered. In addition, some more advanced patterns require the pulled threads to be placed up, down or to one side, rather than the middle of the area.

The general rule of thumb on pulling stitches, is to never pull on the first leg. Use the second and subsequent legs to set each prior leg by pulling in the direction opposite the line of travel on the first part of the next stitch. Thus, if you have set the first stitch (1-2), on the next up (3) you will pull. If your stitch is to the right, you will pull to the left.

(2) Correct thread and correct fabric makes the look work. The looser the fabric weave, the more lacy the overall look. For example, the loosest weave you should choose is 25-count Zweigart Dublin Linen, as it has all the necessary characteristics, loose weave, even weave, well loomed (it will handle being pulled). The rule of thumb in choosing the working thread is that the thread should be the same weight as the thread of the fabric. You also need to choose a thread that will withstand the serious pulling and will slip until the optimum tension is reached and then hold. Perle cotton meets these needs well. The thread #8 cotton perle is the approximate diameter of the weaving threads. If you like a more lacy look, #12 perle cotton could be used. Historically, linen, cotton and silk threads were used for the embroidery. The count was varied.

(3) Stitch choice for value or density also plays a major part when working a design. When doing a sampler, the placement of the patterns is less important. The heavier filling stitches should be placed closer to the bottom. Also, in order to give greater definition to the work, similar stitches should not be placed side by side in the pattern.

There are competing opinions on whether to outline the piece first or last. If you do the outline first you have a better anchor for your threads and you will have a harder time with compensating stitches. If you outline after, it can even up the edging lines. Historically it appears they did it both ways.

A Notebook of Pulled Thread Stitches, by Eileen Bennett. Published by The Sampler House, 1999.

A Pictorial History of Embroidery, by Marie Schuette and Sigrid Muller Christensen. Published by Frederick A. Praeger, 1963.

….and some counted-thread flat patterns