Period Stitches (#6 in a series)

One of the most frequently asked questions in the Guild is, “What stitches are period?” This article, the sixth in a series of six, looks at another category of the Apprenticeship Program, Stitched Fabrics. This article first appeared in the Guild newsletter, The Filum Aureum, Summer 2001.

Fabric that is puffed, stuffed, quilted, corded, gathered, appliquéd, and otherwise manipulated is all included in our Guild program’s sixth and last category, called “stitched fabric”.

Quilting is the process of stitching two or more layers of fabric together. Sometimes there will be a middle layer of soft padding such as carded cotton or wool; colorfully referred to as “bombasted” in Elizabethan England!

The exact origins of quilting are unknown, though it is believed that it may be traced to the Middle East as early as the Egyptian First Dynasty (3400 B.C.). There is a carved ivory figure, dating from this time period, who is depicted wearing a mantle or robes with a lozenge shaped pattern. This pattern is believed to represent quilting in the garment, but it could also represent a woven or printed pattern. Pictures of this figure can be found in Quilting, Patchwork, Applique, and Trapunto by Thelma Newman as well as Averil Colby’s Quilting. Another early quilted piece is a quilted carpet in the collection of the Department of Archaeology of the Academy of Sciences in Leningrad that is believed to date to sometime between the first century B.C. and the second century A.D.

Quilting appears to have been brought to Europe and the British Isles by the returning Crusaders in the eleventh and twelfth centuries. It is believed that during the Crusades the Europeans discovered that the quilted garments not only offered them a certain degree of protection against arrows but they also protected against chafing when worn underneath chain mail. Today these garments are known as aketons, gambesons or pourpoints.

There are very few surviving quilted pieces remaining from our period of study. We do have records from inventories and warrants that indicate the existence of quilted garments such as waistcoats, petticoats and doublets. We also have written records and descriptions of bed quilts, though very few are thought to exist today. One such record is from the 1584 inventory of the belonging of Robert Dudley, Earl of Leicester, which probably refers to a decorative quilt rather than one meant for sleeping under:

“A faire quilte of crymson sattin, …, all lozenged over with silver twiste, in the midst a cinquefoil with a garland of ragged staves, fringed aboute with a small fringe of crymson silke, lined through with white fustian.”

One of the surviving quilts from our period is in a private collection in Belgium. (image 1) In 1544 this quilt was a gift from Karel V, the Hapsburg Emperor to his court physician. The quilt is red silk and is embroidered with many colors of silk, is filled with raw cotton wadding (batting), and the edges are finished with silk fringe. The motifs used in the embroidery of this quilt include a double-headed eagle, narrow borders of fish, a bird of paradise, and floral and plant ornaments. 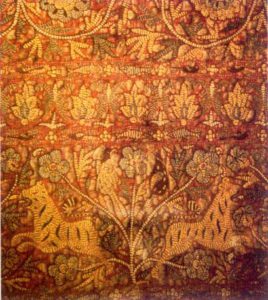 Trapunto is sometimes referred to as Italian Quilting, Stuffed Quilting, or Padded Quilting and is a form of quilting in which the design is outlined with stitching and then cording or other padding is inserted from the back of the quilt, creating a raised effect.

The raised areas in trapunto are achieved using several methods. The first is to fillt he motif as you stitch that area of the quilt by placing the filling material between the two layers of cloth.

Another is to insert cotton cording or loose batting (such as carded wool or cotton or fiberfill) into the area being filled after all the quilting has been completed. This can be achieved by either cutting a small slit in the back of the motif, stuffing it, then sewing it closed, or by threading cording through using a needle and moving the threads of the fabric to allow the needle and cord to pass through.

The third method is to place your filling between the layers of the quilt and to create the raised areas by quilting the areas around them very closely so that you compress the filler enough to make the unquilted or less-quilted areas stand out.

More information about trapunto is available in the Trapunto & Stippling Workbook by John Flynn and Mary Morgan and Dee Mostellers’ Trapunto and Other Forms of Raised Quilting.

This technique was used in a pair of quilts known as the Tristam Quilts which were created in Sicily during the late 14th century. These quilts, one of which is in the collection at the Victoria and Albert Museum in London, feature scenes from the Tristam’s life with descriptive text as well as pictures. These quilts are made from two layers of heavy linen with the outlines of the principle characters stitched in brown linen thread and the outlines of the other patterns were stitched with a natural color thread.

Another surviving quilt that is believed to date back as far as the early 1600s is a whole cloth, stuffed silk quilt from Cornwall. (image 2) Like the Tristam quilts, this quilt features scenes and figures which have been stuffed to bring them into relief against the background. This quilt features motifs such as a ship at sea, hounds, double headed eagles, unicorns, gryphons, and hunters and is thought to be Indo-Portuguese in origin. 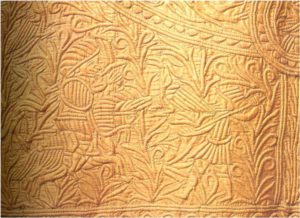 Appliqué is defined as: “decoration or ornament, as in needlework, made by cutting pieces of one material and applying them to the surface of another”. As with other forms of embroidery, no one knows exactly when it began, but it is said to go back as far as Siberia in the fourth century B.C.E. 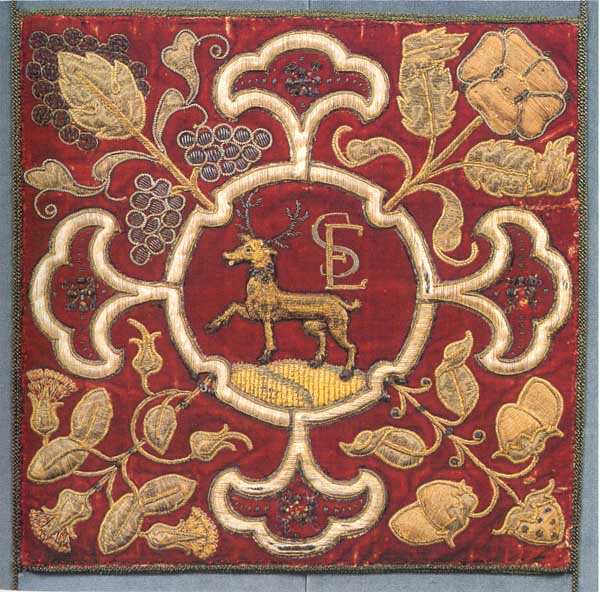 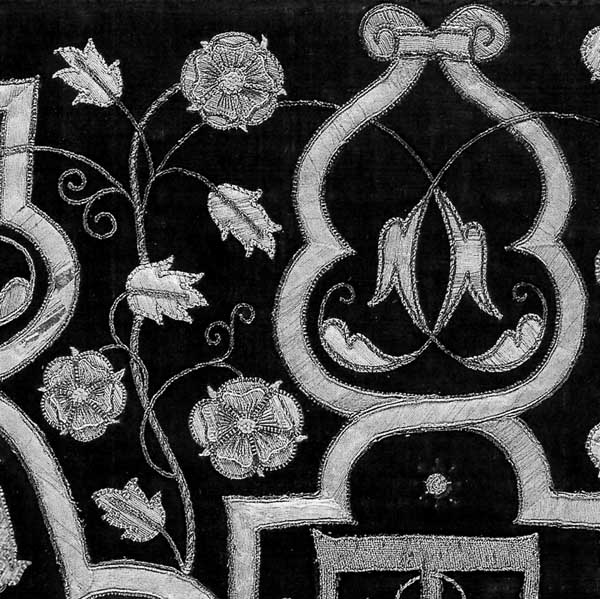 We have many examples of appliqué from our period of study. Not only were fabrics and leather applied to other fabrics, but sometimes embroidered pieces – such as slips – would be applied to a ground fabric after the embroidery was completed or, perhaps, the original ground fabric became worn. Some examples of decorative needlework that use appliqué area heraldic panel from Hardwick Hall (images 3 & 4) and a 14th century wall hanging from Germany that depicts scenes from the Tristan legend. (image 5). There are also examples of appliqué used in heraldic armorial display – clothing, banners, etc. – though one must sometimes look closely to tell whether the piece in question is embroidered or painted. 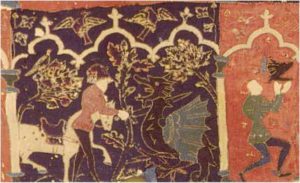 The American Heritage Dictionary defines smocking as “needlework decoration of small, regularly spaced gathers stitched into a honeycomb pattern. Smocking is a technique used to control excess fullness, usually in a garment such as a shift or chemise, shirt, dress, or apron.” The early history of smocking has proven to be a challenge to me, and so the information presented here is largely speculation on my part using what I know of modern English Smocking and studying portraits. I have read one person’s claims to have seen a piece of embroidery that resembled smocking in a collection of artifacts from a Danish Bog dating to 1175 B.C. This technique, so far as I know, is one that would have been used primarily (probably exclusively) in the construction of garments. 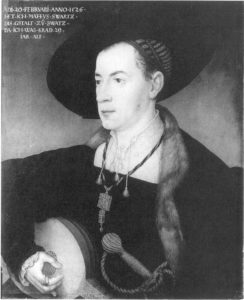 If you examine German and Italian portraits of the 15th and 16th centuries, such as Albrecht Durer’s “Self Portrait at 22” or Hans Maler’s portrait “Matthäus Schwarz” painted in 1526, you will see examples of decorative smocking. (figure 6) Another example of smocking from our period of study can be seen in Hans Memling’s “The Rest on the Flight into Egypt”. (figure 7) 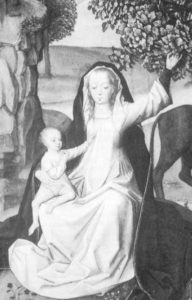 There are several books available today that discuss nothing but how to perfect your quilt stitch. Two to look for are Hand Quilting by Alex Anderson and That Perfect Stitch by Roxanne McElroy.

There are many stitches that can be used for appliqué. When sewing your appliqué to your ground fabric, a stitch such as a blind stitch or slip stitch works well, as does buttonhole stitch. You may want to embellish around the edges of your appliqué by couching cord along them or with surface embroidery such as stem stitch, outline stitch, or flat stitch.

When we think of quilting, we often think of a modern bedcovering with a front, a back, and a filling of some sort. Modern quilters often use manufactured batting for the filler, which can be made from cotton, silk, wool, or polyester. Carded cotton is actually the most common filling in the surviving pieces of historical quilting.

Surface and backing fabrics include linen, silk, and wool. If you are quilting for the first time you might be more comfortable trying the technique on a smaller, less expensive scale by using a good quality cotton muslin.

For all of these techniques any good quality sewing thread will work well. In the historical pieces we have, usually linen fabric is quilted with linen thread, silk with silk thread. If you choose to go that route, some fabric stores are starting to carry more silk thread. Other threads that work well for any of these techniques are cotton quilting threads which are sometimes glazed or treated to travel through the fabric more easily. YLI carries a glazed cotton thread in a range of colors that works very well for hand quilting. Gütermann also makes a range of threads including linen (for hand sewing), silk, and cotton quilting thread.