Artisans have probably been decorating book covers for as long as there have been books — and before the invention of the “codex,” the book with pages that has been the mainstay of literature in the West for a thousand years or so, the long Judaic tradition of rich covers for the Torah scroll tells us that there were fancy covers for scrolls, too.

Particularly precious are the many covers that have been made for sacred scriptures, such as the Psalms, or the four books of the Gospels. Many “treasure” covers survive, whole or in pieces, decorated with gold, ivories, enamels and precious stones.

Needlework, however, seems to be a relative latecomer to the book cover trade. If that’s true, one reason for it may be that, for books written on parchment or other animal skins, covers tended to be rather rigid and heavy. Parchment is not completely flat by nature, and to keep the pages of a parchment book flat and smooth, it helps to store them between rigid covers that can apply a bit of pressure. Not until books came more commonly to be written, and then printed, on paper, did soft covers really become practical. So the oldest and most precious books often have wooden, metal, or thick leather covers that can be firmly fastened with clasps or ties. These can be stamped, carved, painted, or set with metalwork, but are not a very good medium for needlework.

The earliest English needlework book cover to survive is two rather worn panels of Opus Anglicanum, now inset into a leather cover. The book they cover is a manuscript psalter that was written in the 13th century and later belonged to Ann Fellbrigge, a late fourteenth-century nun in Suffolk. The front cover is a scene of the Annunciation to the Virgin Mary, and the back cover is a Crucifixion scene. The subjects and framing suggest that these really were worked as a pair of book covers and not cut down from something else, as they are very similar to the central layouts of earlier Gospel book covers. The figures are worked in bright colored silk split stitch and the backgrounds are gold underside couching in a pattern of fine zigzags. They aren’t illustrated here because they don’t reproduce well in photos, but you can see a color illustration of what the front cover may have looked like when new in Cyril Davenport’s English Embroidered Bookbindings, available online (see Bibliography).

Later book covers appear in a variety of techniques. Especially popular in the Renaissance were small editions of books of psalms or prayers, which could be heavily ornamented and carried in a pocket or hung from a belt. As particularly precious objects, a number of these have survived, in sizes ranging from the 5×7-inch book at left, down to miniatures just two or three inches high. 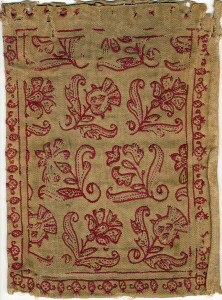 The most basic embroidered book covers are in plain, close stitching of one kind or another. A number exist in simple canvas work, including tent stitch, as in the example at bottom left on this page. Others are in rococo stitch, or in what appears to be very tightly packed chain stitch solidly covering the surface. The British Library has an example (left) with a repeated floral motif worked in simple stem and running stitches in red silk on heavy twill. 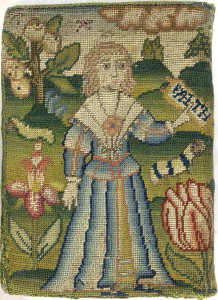 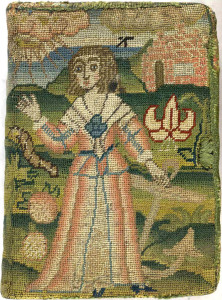 These covers are usually worked in silk, with some wool thread in the case of canvaswork. The dense stitching makes these covers sturdy and long-wearing. Some have geometric stitching, others have curling vine motifs with flowers like those seen on sweet bags. Still others, like the tent stitch example here, have scenes of Biblical or symbolic characters; the left-hand woman on our example carries an open book identifying her as “Faith,” and her companion at right holds an anchor symbolizing “Hope.”
bookcover in tent stitch, woman representing Faith bookcover in tent stitch, woman representing Hope 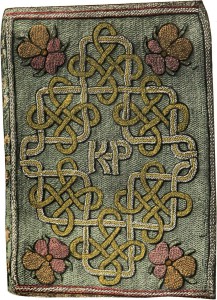 The book cover (right) is another worked mostly in stitchery, a famous example in colored silks in dense brick, chain and buttonhole stitches. It was made by the future Queen Elizabeth I as a young girl, as a New Year’s gift for her stepmother Queen Katherine Parr — hence the KP initials on the front. Princess Elizabeth also copied out the manuscript inside, the popular devotional work Miror or Glasse of the Synneful Soul, which she translated “out of French ryme into English prose… as well as the capacitie of my symple witte and small lerning could extend themselves.”

The background is a solidly worked brick stitch in pale blue silk, on top of which are worked the raised initials and knotwork in gold and silver chain stitch, and the “heart’s ease” or pansies in purple and yellow buttonhole stitch with green leaflets, lightly padded.
book cover done in silks with brick, chair and buttonhole stitches

Another common type of embroidered book cover, especially in the 15th and 16th centuries, is worked on plain velvet, usually a dark color, with twisted gold cord and bits of gold and silver “purl” or wire. The cover of this issue shows a pattern (left) taken from one of these , a very large cover worked on crimson velvet for a Bible for Henry VIII, with the initials “HR” (for Henry Rex) in the center. This issue’s “Show and Tell” piece is also taken from this pattern. 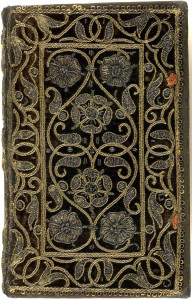 The example on the right is another in gold and purl, covering a book from Geneva, the Orationis Dominicae Explicatio (The Lord’s Prayer Explained) of 1583, which belonged to Queen Elizabeth. The outlines are all in gold cord, and most of the fillings are silver purl over padding, with some red and green silk on the roses and leaves.

Gold and silver wire, though very decorative, are fragile and cannot simply be used in embroidery as though they were thread. Stitching in and out with gold wire would also leave too many inches of this extremely expensive stuff hidden on the back of the embroidery. So instead, gold may be flattened and wound around a silk core to make gold thread, or gold or silver wire may be tightly wound around a thin rod to make a springlike “purl”, lengths of which can be cut and invisibly sewn down like beads to decorate a surface.

Gold thread can also be plied and twisted to make a very flexible gold “twist” or cord, used for the outlines. This can also be sewn down quite invisibly with small stitches hidden between the plies of the cord. Gold thread can also be made into more complicated braids, like the one used around the edge of this book cover, which is a several-stranded flat braid with little loops of gold wire along one edge.
bookcover in gold thread and silver purl 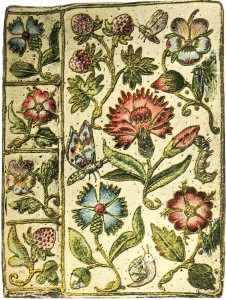 A third common type of luxurious book cover is embroidered on satin, often light colored, with long stitches of bright silks, and is often further decorated with spangles and sometimes pearls. This style, and the previous one, become even more popular in the generation after 1600, appearing not only on book covers but also on sweet bags — which were sometimes specially made to hold a particular book. Above at right is a delightful 1630s example of this style, which has, however, lost all but about two of its spangles. But the silks and the gold corded outlines are still in good shape.

This particular example is rather informal in design, with flower and insect motifs filling the space very nicely but not at all symmetrically. Other examples feature formal “arabesques” like the book cover at left, coats of arms, Biblical scenes, or symmetrical leafy arrangements. Some examples have areas thickly covered with seed pearls. Others have needlework portrait panels, raised flowers in detached buttonhole stitch, or coils of gold or silver wire that have been carefully flattened to appear like braid made from a close series of wire loops. Again, all these are also found on contemporary sweet bags, glove cuffs and other small ornamental items. A few examples are so thickly encrusted with decoration that to modern eyes they seem like overkill!

Who was actually working these elaborate bindings? In large cities there were professional embroiderers in plenty. There were also independent craftsmen, who could be hired to design or execute large embroideries for noble households in the country, such as Bess of Hardwick’s embroiderer Thomas Lane, who appears in her account books off and on for nearly twenty-five years.

We also know that women wealthy enough to have some leisure time also did competent embroidery on their own, usually of smaller items. This is especially likely when the items were intended as special gifts, as with the book cover worked by Princess Elizabeth already mentioned. She may also have worked the cover for a small copy of the Letters of St. Paul bound in black velvet with a design in silver and gold twist. And we know other women worked book bindings as well: at least one slightly later book, a copy of the Psalms from 1633, has a note in the manuscript that the cover was worked by “Elizabeth, wife of Matthew Wren, Bishop of Ely.”

Books were valued possessions in the Middle Ages and Renaissance, even after the invention of printing had brought down their price somewhat. Whether done as a tribute to the value of the words inside, or simply as a piece of wearable art, an embroidered book binding was something to work with care and show with pride.

British Library Catalog of Bookbindings Online — Over 100 BIG pictures of embroidered bindings, ranging from about 1500 into the 20th century. Go to: http://www.bl.uk/catalogues/bookbindings/keysearch.asp and enter the keyword “embroidered.” The first 100 or so books are mostly pre-1600.

Davenport, Cyril: English Embroidered Bookbindings, ed. Alfred Pollard 2006 (originally published in 1899)
Available for FREE download online at: http://www.gutenberg.org/etext/17585
Or to download a copy of the whole thing (including plates), right-click on http://www.gutenberg.org/files/17585/17585-h.zip
(Be warned, it’s a BIG file — almost 18 megabytes. I had trouble printing it on my computer from the first HTML site — it kept telling me I was “out of memory.”)