Is This Stitch Period? (#13 Of A Series) Lace & interlace
— by Christian de Holacombe, Guild Chronicler 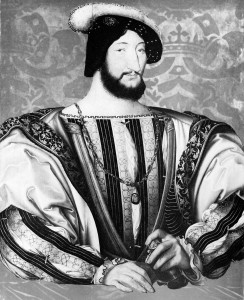 King François I of France, showing off his “Big Sleeves” in this painting by Clouet, is a splendid illustration of the Renaissance fascination with interlace. 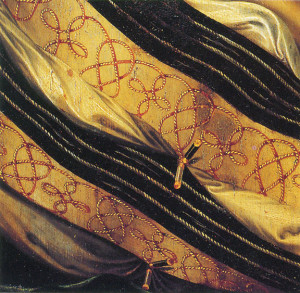 Detail of King François’ sleeves, showing the interlace worked in couched cord, with plain lines of cord on the dark stripes.

In medieval and Renaissance Europe, ladies and gentlemen both seem to have been crazy about anything interlaced, intertwined, braided or knotted. Interlace decoration appears on fabric and in embroidery, in stonework and plaster, printer’s borders and pottery painting, hair braiding, woodcarving, leather stamping, and even in the plans of “knot gardens.”

The popularity of interlace design dates at least as far back as the Greeks and Romans, and it continues through 4th century mosaics, 7th century cloisonné goldwork and 11th century ivory carving to well beyond the end of our period. I was fortunate enough to find a copy of Alain Gruber’s The Renaissance and Mannerism in Europe on sale for half price, and it’s filled with excellent photos of a staggering number of examples in every possible medium.

“Interlace” appears to be the simplest and most general term to describe decoration that shows lines, cords, plant stems, and the like crossing over and under each other to form a pattern. 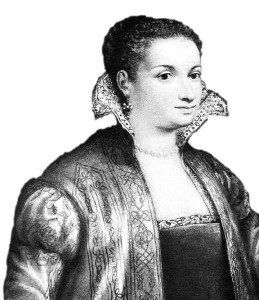 Emilia di Spilimbergo, painted in the mid-1500s by Titian, shows that interlace decoration is not just for men!

(As for what we now call “lace,” early forms of decorative white openwork did appear in the Renaissance, some of the first being composed of interlaced tapes tacked together. Bobbin lace, a bit later, is made from fine threads interlaced and braided. Today white openwork has taken over the word “lace” almost entirely.)

It’s not always easy to tell from a painting or a photo exactly how a piece of interlace is actually worked. Embroidered interlace may indeed be simply a flat pattern in cross stitch or pattern darning, giving only the illusion of an interlaced design. More commonly, the interlace actually consists of a separate cord, strand or bunch of threads, plain or fancy, laid down upon the fabric surface and fastened down, as in King François’ sleeves.

In classic Renaissance interlace, the lines are usually uniform in width, any ends of the line are usually concealed or left plain, and the pattern shows a single or double path in a complex pattern of open knots and braiding. Pages from several period pattern books in this issue show some of the variety of these designs. Many of these can be worked either by couching down a single line of heavy cord, or by creating the illusion of a cord with double lines of finer cord or thread worked in parallel, to create a flatter pattern.

Along with the corded interlace on the light panels of his sleeves, François is also wearing an outer robe bordered with strips of a light arabesque pattern on dark cloth. You can see these strips between the edge of his neckline and the wide area of light-colored fabric on his upper arms, which is actually the turned-back edges of this over-robe. François’ contemporary Henry VIII of England seemed to be particularly fond of arabesque designs as well.

Arabesque originated just where its name indicates, in the Arab world. Islamic cultures generally discourage decoration that involves pictures of real people or things, so abstract design was raised to a high art, and interlace is seen in Arabic calligraphy, in tile and brickwork on buildings, in manuscript illustration and embroidery.

What makes arabesque different from ordinary interlace is the many curly leaves, tendrils, dots and curlicues attached to the interlaced stems.

In the late Renaissance this develops further into “strapwork,” with the illusion of three-dimensional ribbons, scrolls, and frames, complete with shadows. Strapwork is immensely popular in paintings and engravings, and appears in some of the elaborate wall hangings at Hardwick Hall. 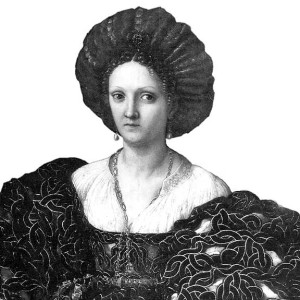 Interlace can appear either as a border or as an allover pattern. Examples of allover patterns include the coronation robe of the Holy Roman Emperor (Palermo, 1181), which has a large panel on the front covered with interlace worked in a double row of pearls. Allover interlace patterns are common woven into Islamic-influenced textiles and in Oriental rugs or table carpets, and appear on clothing as well. Probably the most outstanding example is a portrait (right) of the Duchess of Mantua, painted by Giulio Romano in 1531. Her outer gown appears to be entirely made of interlaced strips in elaborate knots and twists — although if you look closely, you can see that the “strips” are actually embroidered on a solid piece of velvet, with large cutouts to create this illusion.

Borders of interlace appear in all sorts of Renaissance portraits; for instance, if you look closely, St. Nicholas, dressed as a bishop in Raphael’s Ansidei Madonna (1505), wears a cope with a wide band of gold interlace around the neck. The Master of Flemalle in the mid-1500s paints the Virgin Mary wearing a plain white gown with an elaborately interlaced gold and jeweled hem — although jeweled hemlines seem to appear mostly on “saints, angels, queens and others who don’t have to worry about getting their hems dirty,” according to clothing researcher Robin Netherton.

Borders and allover patterns from outside Renaissance Europe are abundant as well. For instance, surviving scraps of elaborately interlaced borders, presumably from clothing, appear in the Bouvier collection of Islamic textiles. Islamic samplers of pattern-darned borders for clothing, including interlace, survive from these cultures as well.

Finally, if we need more evidence that interlace patterns were extremely popular, there are many pages of them in the veryfirst printed needlework pattern-books, which began to appear in the middle of the 1500s. Fully a third of the plates in Nicolas Bassée’s New Modelbuch of 1568 contain at least one interlace pattern, and many of these are plates he simply lifted from earlier pattern books. Some are charted patterns for counted-stitch work; others are line drawings, which could be translated into a variety of needlework techniques.

Interlace patterns, as we have seen, could be created in couched cord — an especially common technique in the European Renaissance — or as flat patterns in blackwork, pattern darning, ribbon appliqué, or voided work in long-armed cross stitch, as in the pattern below.

The book I started this article with has a theory that there is a metaphysical meaning behind knotwork’s popularity: that it symbolizes eternity. I’m not sure that it needs such a deep explanation. It could just be that the possibilities for decoration with interlace are as infinite and unending as the designs themselves.