What Stitch is Period (#1 in a series)

One of the most frequently asked questions in the Guild is, “What stitches are period?” This article, the first in this series, will concentrate on the basic stitch of the misunderstood stitch family of Cross Stitch.

This article first appeared in the Guild newsletter, The Filum Aureum, Spring 2002.

Cross stitch is many people’s firstintroduction to modern embroidery, and a pleasant one it is. The stitch itself is quite simple – just rows of X’s – although of course there are refinements you can learn later. But once you master the mental ‘twist’ that lets you translate dark and light squares on a chart into X’s across thread intersections on cloth, you can follow any chart and cover just about anything with your embroidery.

Did medieval people do cross stitch, and if so, how did they approach it? Here’s where the ‘cross’ in our title becomes ‘cultural.’ Yes, cross stitch was certainly done in the Middle Ages – but identifying a stitch is not terribly meaningful outside of its cultural context and style. We not only have to ask when a certain style of embroidery was stitched, but in what cultures and by what kinds of people. What materials were used for thread and cloth, what kinds of stitches were used together, what kinds of motifs were considered suitable, and exactly how the stitches were constructed are also important parts of the cultural context.

Probably the most overlooked aspect of cultural context is what kinds of items were decorated with a particular style of stitching. In modern times, other than as an artistic exercise or as a joke, you’d probably expect to see canvaswork (‘needlepoint’) chair upholstery but not canvaswork blouses; lace dresses or gloves but not lace dishtowels – at least, not if you’re actually going to use them to dry dishes. In the same way historically, you expect to see Elizabethan blackwork on collars and cuffs, but not on stockings or shoes.

So let’s look at medieval uses of cross stitch, including its cultural contexts. 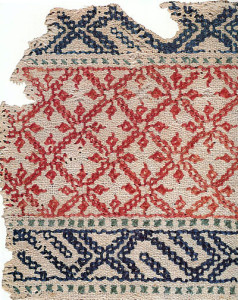 There has been a great deal written about cross-stitch and long-armed cross stitch toward the end of our period, in the 15th and 16th centuries, where it seems to have become increasingly popular. It’s used then for canvaswork, on decorative towels, as a part of some embroideries worked in double running stitch, and as a background in “voided work” on linen (often called Assisi work), which Sabrina de la Bere will be discussing in our next issue.

I’m not going to say much about these later embroideries in this article, since there’s a relative abundance of material about them. Instead I’m going to focus on the use of cross stitch in earlier centuries, especially the 13th and 14th, since I have some very interesting pieces from those centuries for us to look at.

Like many good ideas, including knitting and the number zero, cross stitch probably came to Europe from cultures to the east or south. Cross stitch embroidery is said to have flourished during the T’ang dynasty in China (618-906 AD), and it could have spread westward from there to the Mediterranean along the Silk Road and other trade routes.

A piece sometimes cited as the ‘earliest’ evidence of cross stitch is an embroidered roundel, found in a Coptic cemetery in upper Egypt and dated to the 7th or 8th century. It’s done mostly in split stitch and shows the Annunciation (i.e. the Virgin Mary and an angel); in fact, it’s a very close copy of a slightly earlier woven silk fabric in the Vatican Museum. There are a couple of dozen cross- and star-shaped stitches, done on top of the split-stitch filling, decorating Mary’s dress.

To my way of thinking, these are not really ‘cross stitch,’ because they are irregularly scattered, oriented at all angles, and have varying numbers of points (4, 6, or 8). It seems to me more useful to define “true” cross stitch as regularly spaced X’s, worked in a pattern and oriented on the grain of the fabric (usually to counted threads).

One of the earlier pieces of embroidery I’ve seen that uses true cross stitch is the one on our cover (above). You can see that there are carefully spaced rows of separated crosses decorating a fragment that is mostly worked in double running stitch. This piece is also Coptic, from Mamluk-ruled Egypt in the 13th or 14th century, and was probably once part of a linen tunic or handkerchief. These same rows of detached cross stitches turn up from time to time in later embroideries too, most notably decorating the seams of a woman’s smock embroidered with small animals in stem stitch from the early 1600s. 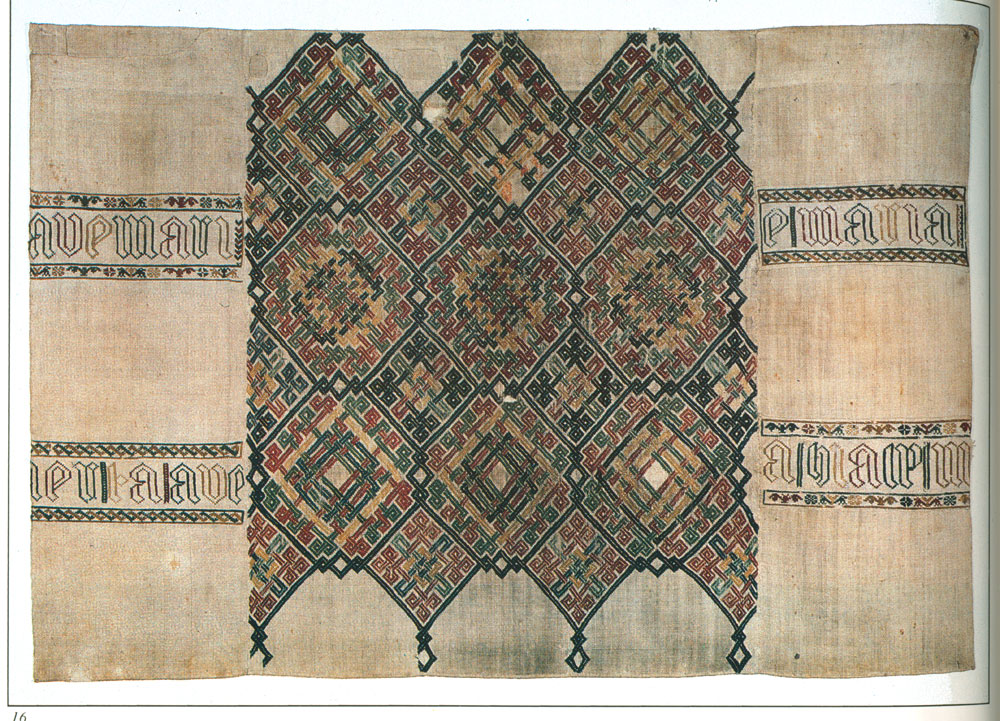 Motifs in long arm and simple cross stitch from a wool cushion in the royal tombs at Las Huelgas, near Burgos in Spain.

From the 13th- and 14th-century royal tombs at the Monastery of Las Huelgas, near Burgos in Spain, come also several examples of a third style of medieval cross stitch, probably the one most often seen: long-armed cross stitch, in wool or silk, worked solidly in rows to cover the whole linen background, forming a smooth and colorful surface. In the Renaissance, solid stitching like this in wool is one of the techniques used to make table carpets: it proved to be a light-weight and inexpensive way to copy the designs of the costly and very heavy Oriental carpets then being imported. (In our own guild, Mistress Anne of Bradford has been working on a splendid example of such a carpet up in Oertha.)

The examples we have here of this technique and from earlier centuries are mostly used as bags and cushion covers. Because the long-armed cross stitch is worked firmly, and because the stitches overlap, with most of the yarn on the front of the fabric, it creates a very hard-wearing surface for these and similar uses.

With a bit of planning, this solid long-armed cross stitch technique also provides a lot of freedom to vary colors, stitch directions and motifs. Long-armed cross stitch can be worked horizontally, vertically, or diagonally, and it’s easy to change direction. As in the detail on this page, very often the embroiderers have worked different parts of the embroidery running in different directions. The zigzag motif on the purse on p.6 is also worked in continuous lines of color, which change direction at the corners of the zigzag. 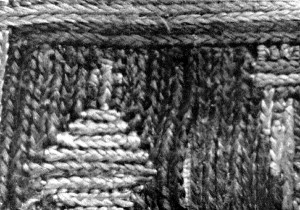 Another source of variation is in the way the stitches are worked – whether back-and-forth or with all rows in the same direction, with stitches in succeeding rows crossing in the same or opposite directions. The surface can look startlingly like knitting at first glance- until you see a line of stitches turn a corner, or until you look at the back of the work, where you can see the linen it’s worked on. 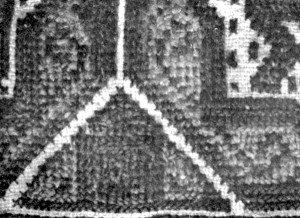 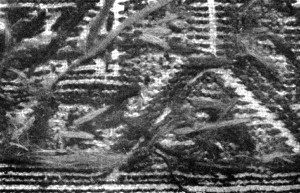 Front and back details of the long armed cross stitch cushion cover from Las Huelgas.

Any pattern worked in long-armed cross stitch can also be worked in simple cross stitch, so it’s easy to get started with projects based on medieval examples. We have extra pattern pages in this issue, along with more material on the Web, which should provide plenty of ideas. I look forward to seeing the results! 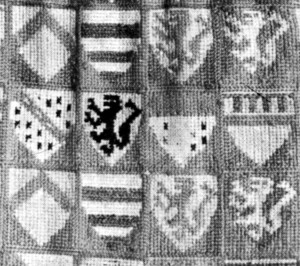 Detail of a purse in long armed cross stitch, worked around 1300.