Period Stitches (#3 in a series)
One of the most frequently asked questions in the Guild is, “What stitches are period?” This article, the third in a series of six, looks at the third category of the Apprenticeship Program, Whitework.
This article first appeared in the Guild newsletter, the Filum Aureum, Summer 2000.

Whitework is a general term for embroidery worked on white linen fabric with a white (usually linen) thread. There are many forms and styles of Whitework. Some forms use texture for effect, such as counted brick stitch or satin stitch work, and can be strictly classified as embroidery. Other forms rely on open spaces made in the fabric for their effect, such as pulled-thread and especially drawn-thread work. These forms of whitework lead to the needle laces of the 16th century. Whitework can also include outlines and details worked with a black, brown or dark blue thread of wool or silk. END_OF_DOCUMENT_TOKEN_TO_BE_REPLACED

I had one of those “revelation moments” a while back — where you suddenly put two pieces of information, both of which you already knew, together for the first time, and it dawns on you, “Oh, so THAT’s why…”

This particular one was about tent stitch, that simple little diagonal stitch that looks like half of a cross stitch and is so often used for the modern embroidery on canvas that we (inaccurately) call “needlepoint” or “tapestry work.” END_OF_DOCUMENT_TOKEN_TO_BE_REPLACED

SHOW AND TELL
Tapestries of the Known World

Hmmmmmm. A medieval embroidery that tells a story … whose drawing style is easy to copy … worked in a fairly easy stitch … in inexpensive materials? END_OF_DOCUMENT_TOKEN_TO_BE_REPLACED

Canvaswork in Elizabethan England was more than simply using Tent stitch to create an overall design, though that was certainly used. In particular, many of the surviving Elizabethan and Jacobean sweet bags were worked on fine linen canvas in a variety of stitches, some counted and others surface, all used together on the same piece. END_OF_DOCUMENT_TOKEN_TO_BE_REPLACED

All that glitters is not gold — but glitter makes a magnificent show, and to royalty, nobles and wealthy people through the ages, that’s good enough. Spangles, studs, bezants, sequins, medallions, and other glittery bits of metal have decorated rich clothing for almost as long as we have surviving bits of clothing at all. END_OF_DOCUMENT_TOKEN_TO_BE_REPLACED

I fell in love with Assisi work many years ago but researching and collecting patterns of it has proved an elusive task. At times I have felt like a detective, and so I decided to share some of my frustrations and experiences with you. My interest in the subject started when I was researching SCA period needlework, just over 20 years ago. I would occasionally see some fascinating designs pushed to the back or side of a page or an article. The technique was the opposite of regular counted cross-stitch, as the design was outlined, then the background filled in densely with cross stitch. The actual pattern was made by the unworked ground fabric. This “negative” effect gave the Assisi work a woodcut quality that I found very rich and unique. END_OF_DOCUMENT_TOKEN_TO_BE_REPLACED

It is a simple stitch, yet has enriched the noblest of medieval embroideries. It is an easy stitch to learn, yet difficult to master. It is one stitch of many used by modern embroiderers, yet enjoys a long history spanning centuries, countries, and cultures. The versatile split stitch is an excellent choice for outlining, completely filling, shading, or delineating detail within a period design. END_OF_DOCUMENT_TOKEN_TO_BE_REPLACED 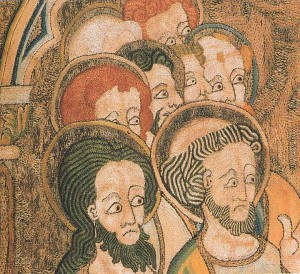 The more I play with silk thread for historical embroidery, the more I get curious about the history of silk, what was used for the historic embroideries, and the modern equivalents. And of course, part of playing with different silk threads is only an excuse to add to my “stash”. END_OF_DOCUMENT_TOKEN_TO_BE_REPLACED

In July 1999 the Shire of Seagirt, located in the Kingdom of An Tir, became a Barony! The Shire’s history has been immortalized in an embroidery which is now referred to as the Seagirt Tapestry. END_OF_DOCUMENT_TOKEN_TO_BE_REPLACED

The roots of blackwork embroidery
(will the real blackwork please stand up?)
by Christian de Holacombe