Period Stitches (#2 in a series)
One of the most frequently asked questions in the Guild is, “What stitches are period?” This article, the second in a series of six, will look at the second category of the Apprenticeship Program, Canvaswork.

This article first appeared in the Guild newsletter, the Filum Aureum, Spring 2000

Canvaswork refers to needlework that covers the whole surface of canvas with stitching. Today, we refer to canvaswork as “needlepoint”, but this is an American term. If you used the term needlepoint in the Middle Ages, you’d be referring to a type of needle-made lace.

Especially in Elizabethan England, canvaswork was extremely popular. Not only tapestries, but herbals, bestiaries, woodcuts, and colorful carpets coming out of the Middle East were sources for canvaswork designs. Canvaswork decorated the interiors of great manors such as Hardwick Hall: bed hangings, wall hangings, kneeling pillows, seat cushions, table carpets and cupboard cloths. Keep in mind that there were more hard benches than upholstered chairs in Elizabethan England, and that the bedroom was a “state chamber” or semi-public space in a noble’s home. So warmth, grandeur and comfort were major household concerns of the wealthy, and inspired the production of such canvaswork. 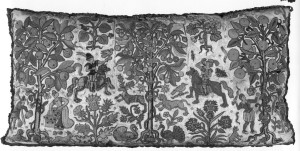 Medieval and Elizabethan needleworkers did canvaswork on a variety of fabrics, not just the heavily stiffened open “canvas” we have today. Sometimes the foundation fabric was so fine that hundreds of stitches could be worked per square inch (for example, the Bradford Table Carpet). Fine silk gauze, linen in many weights from light to heavy, and stouter canvas made of hemp fiber (the word “canvas” comes from “cannabis,” the Latin name of hemp) were all used.

The late 16th c. wall hanging known as the Banquet of Lucretia was worked on “stout” linen using both woolen and silk threads in tent stitch, the basic stitch of canvaswork. The wool stitches were worked in three blues, three creams, three greens, two reds, brown, light sepia, lilac and black, a typical palette. The silk threads used were light blue, green, white and yellow. Shades of pink, blue-green and dull gold were also common in canvaswork. By including both wool and silk thread, the linen canvas could be worked in brilliant colors and a wide variety of shades. Black silk and metal threads were used for detailing and for outlining. 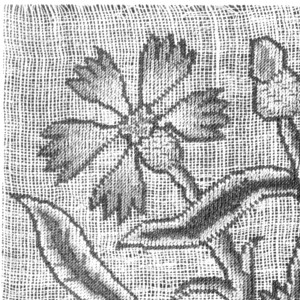 Rather than working an entire piece in tent stitch, many projects (like the cushion at the top of this page) used “slips.” These were flowers, beasts and other isolated motifs worked in silk or wool (mostly tent stitch) on canvas or linen, then cut out and applied to a background fabric, often satin or velvet. Santina Levey notes in her study of the Hardwick Hall textiles that Mary Queen of Scots outlined her slips with black before she filled in the colors. (Above: slips possibly worked by Mary at Traquair House) Flowers, worms, snails, butterflies, dragonflies, deer, fish, lions and other animals (many grotesque and not realistic) were lifted from popular bestiaries and prints and copied onto the canvas. Such “cut-and-applied” canvaswork could also be combined on the same ground fabric with appliqued fabric work and other surface embroidery techniques.

Human figures could be worked in the same way. This “cut-and-apply” method created a rich effect with the silk and metal thread against the velvet. The cushion known as “Fancie of a Fowler” serves as a fine example of this process, as well as a study of late 16th c. Elizabethan costuming. This professionally worked cushion was done in silk and metal thread, picturing a lady and members of her family, mostly in tent stitch and upright gobelin stitches. The figures, once worked, were then cut out and applied to purple velvet. 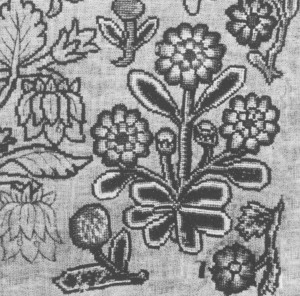 Embroiderers, both professional and amateur, often employed craftsmen skilled in painting and design to create and mark the designs for the canvas. Although canvaswork was done by amateurs, the mere size of some pieces and the detailed design and fineness of stitches indicate that professional embroiderers were often employed. Bess of Hardwick complained (or boasted) about all the hard work she had personally put into her hangings, having “never more than two embroiderers in her employ.”

Inherently strong, the tent stitch was used to imitate woven tapestry by working it evenly across each intersection of the canvas. Tent stitch looks like half of a cross-stitch and is an excellent choice for designs on seat cushions, kneeling pillows, etc.

Since the evenweave linen ground for canvaswork is completely covered, other “coverage stitches” include upright gobelin and brick stitches (very popular in Germany), long-armed cross stitch, and plait or plaited braid. Stem, satin and sometimes even chain stitch are used as detail stitches for canvaswork.

A bit more challenging was “turkey-work” (not to be confused with carpets from Turkey). This “tufted” stitch was used to imitate the middle-eastern method of making carpets. Instead of the woven-in knots of true car-pets, the English used a needle on canvas to make a series of loops, securing each one with a form of back stitch, and then clipping the whole thing afterward to form a pile.

It is a mistake for needleworkers to think that the counted, geometric stitches named above and used in 16th century canvaswork were not used earlier. The Victoria and Albert museum has a tent-stitched purse from about 1450, and several altar frontals done in the 13th and 14th centuries in parts of Germany were embroidered on coarse linen, using linen and silk threads and counted geometric filling stitches. Erica Wilson also notes that on the Hildesheim Cope, the entire linen background was worked in brick stitch. Schuette & Christensen feature a color plate (#VI) of the late 12th century Bell Chasuble, worked mostly in long-armed cross stitch.

Worsted wool thread was the commonest material used for canvaswork in the 16th century. Today, needleworkers can use:

Silk threads that today’s needleworkers can purchase include;

(Note: Order the full amount of thread needed to complete a project so the entire “dye-lot” of that color matches. Experiment with threads to find the correct number of strands that will pass through the canvas easily without fraying, but provide good coverage of the canvas.)

100% linen canvas can be purchased today and is available in 13 or 17 mesh. Since linen canvas or imported evenweave linen can be expensive, ranging from $12 to $25 per yard on up, most people experimenting with canvaswork tend to buy one of the following types of cotton canvas:

Needles: The best needles for canvaswork are “tapestry” needles, which have blunted points, long enlarged eyes, and come in sizes ranging from 13 to 26, though you’re most likely to find sizes 22, 24 and 26. You may need the smaller size blunt needles if you are working with silk or metal threads. Note that one manufacturer’s “size 24” needles may not be the same as another’s.

Frames ($10-50) or stretcher bars ($4-10) are not an absolute requirement for doing canvaswork, but they do reduce the need for blocking, and they help prevent distortion of needlework in progress.