Never let it be said that all medieval needlework is painstakingly

worked in thousands of tiny stitches! Appliqué, stitching pieces of colored cloth onto a background, provides a quick and easy way to make a big splash of color on banners, buntings, bardings and clothing — making encampments and tournaments truly spectacular.

This indeed seems to have been one of the main ways appliqué was used in the medieval centuries. By laying cloth on cloth, you avoid having to solidly cover large areas of your design with colored stitching. All that needs to be done is to secure the edges of the appliqué.

Surviving pieces decorated with appliqué include everything from elaborate Elizabethan pictorial hangings, meticulously stitched in silk, to banners, religious vestments, story cloths, and heraldic devices for horse trappings. Some of the surviving work done in wool or other humble materials is downright sloppy in its stitching, encouraging to the beginning stitcher who can probably do much better!

Appliqué is used in several rather different contexts in our historical examples. One of the earliest and simplest is a plain (or fancy!) band of cloth added to decorate a fabric edge (and perhaps hide the raw edges). While modern stitchers might cut such bands on the bias, most medieval decorative bands are cut on the straight grain and simply eased or mitered along corners and curves. Most often the edge of the strip is turned under and stitched down. 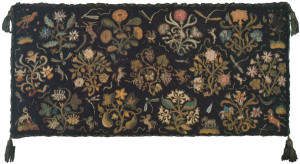 Another use equally ancient is the “recycling” of decorative bands or panels, which may be cut from an old or worn textile before it is discarded or turned into rags, and then applied onto a new garment. Surviving Coptic garments often show this, since the tapestry-woven or embroidered panels on the original garment are more durable than the thinner fabric around them.

Toward one end of the sewing spectrum, these applied panels and bands shade off into the plain and humble patch, applied to repair or strengthen a worn or vulnerable fabric. At the other end of the spectrum we have the elaborate and glittering sixteenth-century embroideries composed of individual motifs or “slips” worked in fine stitching on canvas, cut out and applied onto a rich background fabric.One of the most famous examples is the Oxburgh hangings, which were worked by Mary Queen of Scots and Bess of Hardwick during Mary’s capitivity in England. 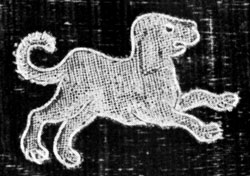 The most common appliqué method seen in period pieces has the appliqué piece being “laid on” and fastened down by a cord couched on top of the edges. One advantage of this technique is that the edges of the appliqué do not need to be turned under. Much of the historic appliqué that we have is worked in heavy silks or wools, and turning under the edges of these fabrics would be awkward and probably lumpy.

As you can see in the diagram, the cord is not mere decoration but has a real role to play. By laying the cord on top of the fabric edge rather than beside it, the edge of the applied fabric is firmly “pinched” between the cord and the background fabric, holding it in place. 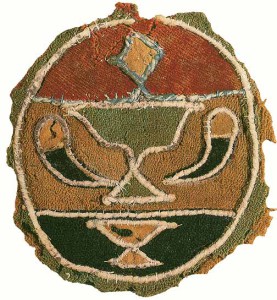 The cords used for appliqué can be anything from a simple bunch of loosely twisted threads to elaborately braided lengths of rich materials. They may be stitched with near-invisible stitches in matching thread, or with stitches that are quite visible and perhaps decorative. The stitching is most often a simple row of straight stitches across the cord.

One disadvantage of corded appliqué is that if the applied fabric is prone to ravelling, the edge may slip out from under the cord and come loose. This is not usually a problem with wool, especially if it has been well fulled or felted. Corded appliqué is most often used on items that are not likely to be washed or rubbed, but even so, the lifespan of material applied in this way may not be very long. These disadvantages are balanced by the fact that this is a quick technique to work, well suited for running up dozens of banners in a few weeks for a special event.

One major use of cloth-on-cloth appliqué is for the display of heraldry or heraldic motifs. At least, these are the pieces that have mostly survived, saved out of family or national pride. The banner displayed above and on our cover, for instance, is the 14th-century family banner of the Blonays, a prominent famiy in Vaud (eastern Switzerland). The roundel shown here at the beginning of this section, in wools with cotton cording, is a piece of Islamic heraldry, the emblem of a royal cup-bearer.

Another famous heraldic appliqué from about this same era is a set of three large semi-circular copes of black velvet, now in Switzerland, which were captured from the Burgundian forces at the battle of Murten in 1476. These bear appliquéd shields with the arms of Burgundy and Artois, and the rest of the surface is lavishly appliquéd with gold-embroidered “flames” and a large “fire-steel” motif, representing the badge of Duke Charles the Bold. 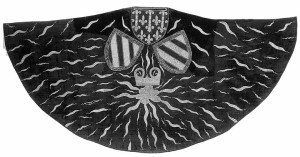 The way the “flames” were worked demonstrates also that it’s quite common to embroider motifs like these on a base fabric such as linen, and when finished, to cut them out and apply them to a richer or heavier background. Many of the rich works in Opus Anglicanum have parts of the embroidered figures worked in this way.

Another major type of appliquéd piece is what we would now call a “story cloth,” figures illustrating a familiar story or legend, made of shaped cloth appliqués with a few touches of embroidery. The well-known North German example below shows an episode from the story of Tristan and Isolde, probably the single best-known and most-depicted secular story of the 13th and 14th centuries. There are 22 surviving episodes from what was probably a wall hanging; the cords at the appliqué edges are narrow strips of (originally) gilded leather. 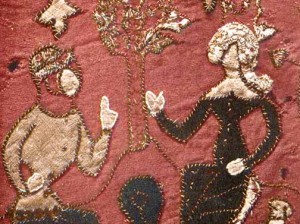 In later-period pieces we see even more examples of embroidered motifs laid onto a ground fabric. We have quite a few 16th-century pillows and hangings, like the black velvet pillow shown earlier, with flower sprays, and the delightful embroidered puppy from a bed hanging at Scone Palace, possibly worked by Mary Queen of Scots.

These later motifs include just about anything that could be found in engraved illustrations of the time: mythical figures, fruits, insects, exotic trees, animals, figures at work or pursuing sports, such as the hawking man on horseback shown below on another late 16th-century pillow. Most of these were worked in fine tent stitch in wool and silk on linen. A decorative effect seems to have been more important than any kind of strict realism, so a thistle may easily appear bigger than a hawk! 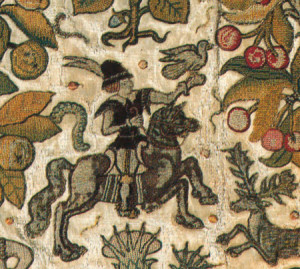 There are some helpful techniques for appliqué, used by many modern needleworkers, that would be quite plausible for medieval needleworkers to have used in some form, but so far there is not a lot of surviving evidence for them.

One is the use of a stabilizing backing on the appliquéd piece, such as paper or parchment. We do know that cloth backed or covered with parchment was used for some bead embroideries (including parts of a 14th-century Madonna from Halberstatt) to help support the weight of the beads without distorting the fabric. Parts of the Oxburgh (16th c.) embroideries also had paper glued to the back before the embroidery was laid on the background fabric.

Something similar could certainly be done with paper or parchment lightly glued onto a cloth piece before it’s appliquéd onto a background. Stabilizing like this helps keep any long thin strips or points, or any edges cut on the bias, from distorting before they are sewn down. The paper can be removed after sewing is complete through a slit in the background under the appliqué.

If you don’t mind wasting a little fabric, you can also stabilize your appliqué by sewing it first and cutting it out afterward! To do this, draw your design on the appliqué fabric, and lay the whole piece of cloth onto the background fabric, without cutting anything out. Position the design where you want it (peeking underneath and moving it around as needed), pin securely all over, and sew a close running or back stitch around the edges of the design, through both fabrics. Then trim the appliqué fabric just outside the stitching, add the cord on top, and appliqué as usual. We have no evidence that this was done in period, but it’s hard to be sure from the finished product.

Another helpful technique is to use some sort of glue to stick the appliqué to the background fabric, rather than pinning, basting, or simply laying it on the background. There is indirect evidence that some sort of paste was used in appliquéd pieces in period, but it’s not clear exactly what for. The 15th-century Italian “Libro dell’ Arte” says: “Also, for painting hangings, you may cut white cloth, and put it on top of the blue cloth, fastening it on with pastes, like glue; and lay it on according to the figures which you wish to distribute over the ground; and you may paint with washes of colors, without varnishing afterward.” This clearly shows cloth being glued, but it seems not to have been sewn at all!

I admit I’m particularly fond of “glue basting” because in my hands, pins and basting stitches distort the appliqué, and the end result is uneven. A water-soluble glue like Elmer’s (as a casein-based glue it’s related to period “milk glue”) or the common gluestick (also casein glue, but solid) enables it to stay smooth as it’s stitched.

The ease of appliqué is greatly affected by the materials you use. Many of the difficulties of appliqué seem to be related to the use of lightweight or slippery materials, like thin cottons or satin. If you’re new to appliqué, wool flannel or similar washed wool fabric is much easier to work with.

Notes on the illustrations: the “slip” above is enlarged from the black cushion.