THE PROJECT PAGE
An Islamic border

This border uses two embroidery techniques we usually refer to as “blackwork” and “whitework.” More strictly speaking, they are counted-thread double-running stitch (in black) for the dark lines of the border, and single faggot-stitch wrapping (in white) for the pulled-thread areas in the middle of every alternate diamond.

The piece this is taken from is pictured in Marianne Ellis’s Embroideries and Samplers from Islamic Egypt(see Pulled Thread: a tangled web bibliography). As with most of the surviving pieces of medieval embroidery from the Islamic countries, what survives is just a scrap, which originally would have been part of some item of clothing or furnishing. However, many of the examples of Islamic textiles in museum collections were purchased from antiquities dealers, who often threw away the plain parts of garments and kept only the decorative borders or panels for sale, so we don’t know their original context.< 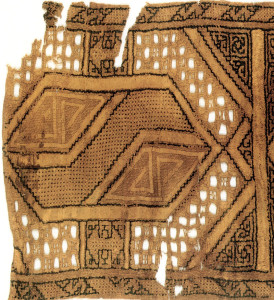 The little border pattern runs along the top and bottom of the fragment. In the middle are a large hexagon with an S-shaped panel of faggoting, and two diamond shapes in counted-thread flat stitches. The area with the large open spaces is drawn-thread work with needle-woven bars, and several other motifs in faggoting and double-running stitch decorate the piece as well.

Above is a modern rendition of the border pattern, worked over groups of three threads on linen. (As with other blackwork and whitework, the pattern can be enlarged or reduced by working over four or two threads rather than three.) In this example, the central diamond faggoting is worked in white thread, and the two diamonds on either side in colored thread to show the stitching.

The diagrams here give more details on how to work the single faggoting stitch. Note that the sequence of the stitches is not necessarily what you would expect just from looking at the surface! But the stitches must be worked this way to create the diagonal “pull” that creates the openwork effect. If it’s done correctly, the reverse side of your embroidery will show parallel rows of diagonal slanted stitches.

It seems easiest for this pattern to work the black outlines first, then go back and fill in the areas of faggoting. The example above is worked on loosely woven linen at about 25 threads per inch, and the embroidery thread is #8 perle cotton.

If done carefully, this border has a nice looking reverse side, though it’s not identical to the front. This means it can be used on handkerchiefs or “basket cloths” where both sides may be visible. It could also be used around the cuffs and neckline of a linen chemise or tunic. Patterns like this seem to have been freely borrowed by Europeans as well, especially in Spain and other areas where Islamic influence was strong. We know that many such needlework stitches traveled to Europe along with the luxury goods imported by Italian traders — along with algebra, knitting, alchemy, and the number zero. Europe owes much to the Islamic world.