The illustration here shows a simple square of linen from Marianne Ellis’s Embroideries and Samplers from Islamic Egypt. It dates from sometime in the Mamluk period 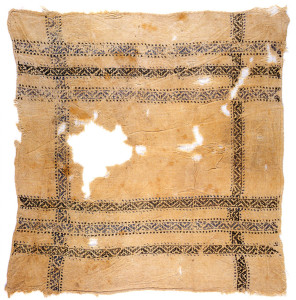 (1250-1517), and is carefully worked to be completely reversible. Ellis suggests it might have been “the equivalent of today’s pocket handkerchief,” but if so, it’s a very decorative one. The embroidery gives the illusion that decorative strips of woven trim have been stitched down on the surface — two groups of three in one direction, two single bands in the other. This would be a nice sized project to practice reversible blackwork.

On reversibility and technique

As mentioned earlier, our ancestors in the Middle Ages and Renaissance did not always work reversibly. But it’s fun to do, when a project lends itself to that treatment, and when you have a pattern that can be worked that way.

It’s helpful to plan your work path before you start, so you know how you are getting from Point A to Point B in the design. There is an excellent discussion at the Medieval Egyptian “blackwork” website (see Resources).

As with any project, it may be worthwhile to stitch some sample bits before you start, trying various threads and numbers of strands. Most of the historical blackwork was worked with each stitch spanning two, or occasionally three, threads in width and height. Getting the size right is an important part of blackwork; thread that is too thick or too thin, and stitches that are too long with respect to the background fabric, will not have a very period appearance. 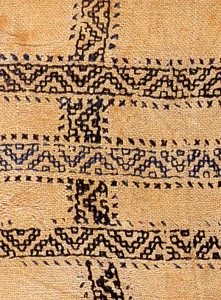 A good way to start your stitching is to use a “waste knot” — which means, tie a good big knot in the end of your thread, put your needle down through the fabric several inches away from where you want to start embroidering, and come up in the spot where your pattern begins. The knot keeps the “extra” thread out of your way until you have worked a few inches of embroidery and are ready to deal with it. Then you can go back, cut off the knot, and just treat the extra thread the same way you do when you are ending a working thread.

It’s often helpful to designate one side as the “wrong” side of your work, even when your aim is to make the right and wrong sides as identical as possible. Do all your starts and endings on the “wrong” side and you will have one side that is slightly better for when you want to show it off.

Invisible endings are the tricky part of reversible work. Sometimes you can hide the ends of the thread in a seam or hem, if you are embroidering straight across a piece of fabric. More often you have to start or end threads in the middle. Try a few different methods and see what works for you.

(1) Wrapping. Before you cut the thread, wrap your working thread several times around a nearby stitch or two. Then cut. This will often be enough to hold it — you don’t have to knot it. If you are stitching with several strands, sometimes you can separate them and wrap one thread in one direction and another thread in the opposite direction. However you do this, you will have small areas of your work on one side (the “wrong” side) where the thread is double thickness, but this is nearly unnoticeable in many cases unless you look closely.

The band pattern on this handkerchief shows a very clever use of spaced cross stitches. They can be worked in two passes, as shown here. On the first pass, take your thread diagonally across and down two threads, then on the back of the fabric go across and up two threads to make a diagonal on the back side. On the second pass (shown here in red), the diagonal stitches will cross those of the first pass, both on the front side and on the back. The result is a completely reversible row of cross stitches, spaced one stitch apart. The spaces on one side will be opposite the crosses on the other side, and vice versa. This pattern shows up in a number of Islamic embroideries, including the one on our cover.